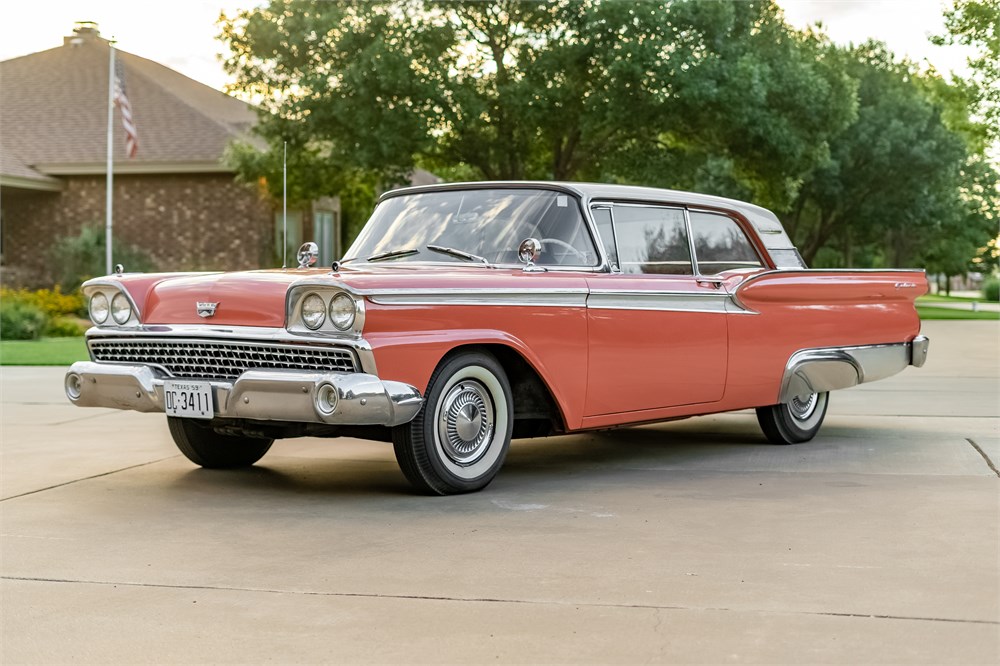 
For my Friday AutoHunter picks, I chose a mix of Fords that demonstrates Dearborn’s design evolution from the 1950s into the 1960s. Which would you buy?

These Fords have been quite popular for a long time, though I feel they’re somewhat dowdy compared to what General Motors came out with in 1959. Maybe the retractable Skyliner is the reason for its evergreen presence, but the Galaxie sub-model bears mentioning because it’s a great example of Ford’s marketing smarts when the company was bruised after the Edsel launch.

In the beginning of the 1959 model year, there was no Galaxie. But someone at Ford noticed the popularity of the all-new 1958 Thunderbird, and it was decided that the Thunderbird’s squared-off roofline (which only the Skyliner had in the beginning) would make a nice addition to the Fairlane 500 line. Ford claimed the six new Galaxie models were a “full ‘fine car’… expression of Thunderbird luxury and classic simplicity.” The Galaxie outsold the regular Fairlane 500 in spades despite the late introduction.

This Texas-based Fairlane 500 Galaxie Club Victoria (Ford’s name for “two-door hardtop”) is powered by a Thunderbird Special 332 V8 hooked up to a Cruise-O-Matic three-speed automatic and dual exhausts. Painted in Geranium with a Colonial White top this Galaxie features a matching interior that includes black cloth trim. Odometer shows 40k miles but the true mileage is unknown.

I’m sure some purists were cringing when Ford decided to make the Thunderbird a four-seater, but the truth is that the Thunderbird was always more boulevardier than sports car. The 1962-63 Sports roadster was a quasi-return to the Thunderbirds of yore, though nobody would be confused in thinking this was a sports car.

The Sports Roadster was more than just a Thunderbird convertible, however, thanks to the Kelsey-Hayes wire wheels (sans skirts, as the two were incompatible due to the spinners), passenger assist bar, and tri-color badges on the front fenders plus a matching emblem on the tonneau cover between the front seat backs. This was a premium automobile in its time—a Ford masquerading as a Cadillac, if you will.

This Rangoon Red 1962 Sports Roadster has the proper 65B body code showing this ain’t no regular Thunderbird ragtop. The Pearl Beige leather-trimmed interior is complemented by the white convertible top. Like most 1962 Thunderbirds, power comes from a leisurely 300-horsepower Thunderbird 390 Special V8 and Cruise-O-Matic. Additional features include Swing-Away steering wheel, windshield washers, outside mirror, and power windows and driver’s seat. Note the nifty headrests, which were part of the Sports Roadster model to integrate into the tonneau cover—neat!

A lot changed in five years, no? No more fins, and an emphasis on horsepower thanks to Ford’s global “Total Performance” racing program. A new emphasis on sportiness was a byproduct of Ford’s performance gains, as demonstrated by this Galaxie 500/XL. The regular Galaxie 500 featured a bench seat, but the Galaxie 500/XL came with buckets, console and other deluxe features. The XL’s standard 220-horsepower Thunderbird 352 V8 was nothing spectacular, but folks interested in going fast had a choice of several high-performance 390s and 406s, with the 427 replacing the latter in the spring.

Seller claims this Galaxie was restored in and out in 2019 and is powered by the Thunderbird 390 V8 similar to what powers the Thunderbird discussed above. However, a four-speed stick with Hurst upgrade makes driving a bit more fun. Other upgrades include a Holley 750cfm carburetor, Magnum 500 mags, Bluetooth stereo with two speakers, auxiliary gauges and MagnaFlow exhausts. The original color of this vehicle was Vintage Burgundy, but the restorer decided to go with black to match the interior. The seller claims the quaint under-dash air conditioning unit’s service valves need replacing, but nothing that dropping the power-operated white top can’t fix. Auction winner will also receive the original radio, wheels and hubcaps, service receipts and a clear Florida title.