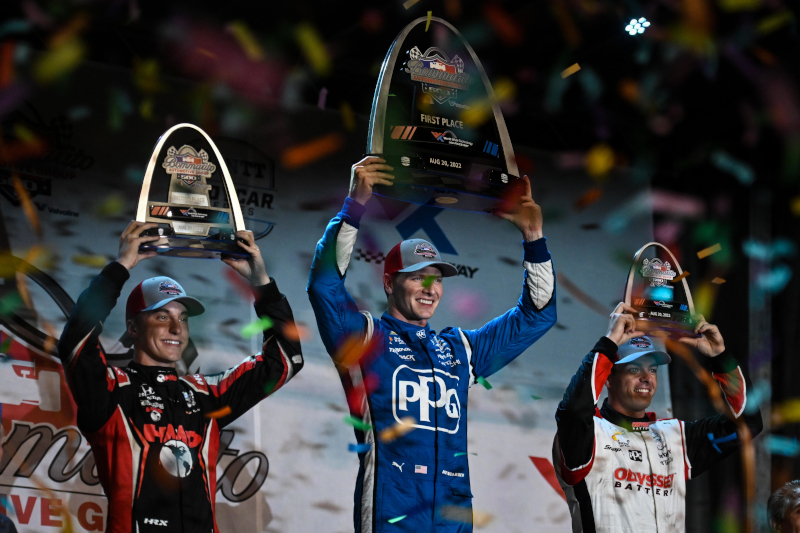 
After a two hour and ten minute rain delay, Josef Newgarden took home his fifth win of the season in the Bommarito Automotive Group 500 and third straight win at World Wide Technology Raceway, closing Will Power‘s championship lead down to only three points.

After losing the lead in pit lane before the weather delay, Newgarden took the lead back from teammate Scott McLaughlin as the race restarted with 37 laps to go. He held the lead from there, even through lap traffic, to take his fourth career win at Gateway. Rookie David Malukas stunned the IndyCar world with his first career podium finish in second, with McLaughlin finishing third.

“We just had to have a good start,” Newgarden said post-race of the final restart. “I knew Scott was going to be good at the end there and he had a great restart, I just tried to work the high lane. The high lane worked earlier for me and I tried to do it again at the finish there and we just had enough to get by him.”

“[McLaughlin] was no slouch this weekend, he was very very good. Scott’s done an amazing job, he could have easily won this race himself so you’ve got to give him credit, but I’m glad we were able to come back out on top. We’re gonna have a lot more races together, that guy and I.”

Understanding that rain was in the area, IndyCar moved the race start up to try and get to at least halfway for an official race. Power led the field to green after tying Mario Andretti for the all time IndyCar pole record Friday at 67, with the top seven drivers in the points occupying the top seven spots on the grid.

In the opening laps, Felix Rosenqvist, who started twenty-sixth after a spin in qualifying, sliced through the field with a perfectly timed start to find himself in thirteenth place by lap two! With his status at Arrow McLaren SP still in the air, the Swede continues to make his case to Zak Brown that he belongs in the series.

The leaders began to pit around lap 55, with Power continuing to lead out of the pits. A one lap undercut by McLaughlin got him past Marcus Ericsson for second, and the Swede was soon swallowed up by O’Ward for third. For all but Romain Grosjean, a lot of fuel save was going to be necessary to make a three-stop strategy work, pitting before lap 60. Grosjean was able to make his first stop on lap 62.

O’Ward caught McLauglin for second place on lap 90 and tried to make a move to the inside, but McLaughlin slammed the door shut and O’Ward made a trademark fantastic save that allowed Newgarden to sneak by for third place. O’Ward decisively took the spot back into turn three a few laps later.

With rain on its way, Takuma Sato gambled with a pit stop on lap 103. The rest of the field began to pit over the next 25 laps, and the top three held their order with Power out front, followed by McLaughlin and O’Ward. Under this pit stop cycle, Alexander Rossi coasted into his pit stall with no power, and the team was unable to get the car re-fired. To the benefit of Power, championship rivals Scott Dixon and Newgarden found themselves stuck in traffic as they blended out into traffic. While Power was the provisional leader, Sato, after his early stop, led the field.

It was about this time that teams confirmed that a weather cell was on the way and told their drivers to forget about saving fuel and push as hard as they can. Sato built a five second gap to those behind him, before the first caution of the day came at lap 145. Rahal Letterman Lanigan Racing‘s Jack Harvey ran out of track in turn four racing teammate Graham Rahal on the high line and smacked the wall, ending his day.

Newgarden, McLaughlin, and Sato pit under caution, with the trio starting no further down than eleventh with only 11 cars on the lead lap. McLaughlin was the highest starter of those who pit in sixth.

Power and O’Ward stayed out and led the field to the restart on lap 157, but O’Ward didn’t wait long to take the top spot with a marvelous move around the outside of turn two on the next lap.

The advantage of new tyres catapulted Newgarden to the lead on lap 165, building a seven-second gap only ten laps later. McLaughlin wasn’t far behind, taking second.

The next set of pit stops began around lap 195, with McLaughlin the first of the leading duo to pit on lap 206. Newgarden came in the next lap, but with traffic on pit entry in the form of Christian Lundgaard, McLauglin was able to jump his teammate and take the lead just before the rain finally came on lap 217 when the race was red flagged.

After over two hours of rain delay, the race resumed. All four Chip Ganassi Racing cars pit under the caution, as did Rosenqvist, Conor Daly, and Kyle Kirkwood.

McLaughlin led the field back to green with 37 laps to go, with a green track, cooler temperatures, and plenty more grip. The lead duo checked out from the pack, but he didn’t hold his lead for long as Newgarden took it back in turn three on the opening lap of the run.

The real star that shined brightest under the lights was that of the rookie Malukas. Restarting fifth, he easily tracked down Power and stormed past O’Ward with 17 laps to go, before catching McLaughlin with 10 to go. Already set for a career best finish, the young American wasn’t going to settle, taking second on the final lap around the outside in turn two.

In 37 laps, Malukas made his name known in IndyCar, surprising many with his fantastic season so far. Closing in as Newgarden began to work through lap traffic, if the race had been five laps longer, we could be talking about Malukas’ first career IndyCar victory.

McLaughlin finished third with another fantastic race, establishing himself as a title contender with each race he runs. Hard to believe this is his second full season in the sport. O’Ward finished fourth, with Malukas’ teammate Sato finishing fifth, carving through the field much like Malukas after the restart on fresher tyres.

Power finished sixth, still narrowly holding onto his championship lead, with the CGR trio of Ericsson, Dixon, and Alex Palou behind him in seventh through ninth respectively. Graham Rahal, in a striking new neon green livery, earned his eighth top ten finish of the year in the tenth spot.

With the title fight closer than ever, a two-race swing on the west coast will determine the 2022 NTT IndyCar Series champion. First up is Portland International Raceway for the Grand Prix of Portland on 04 September.