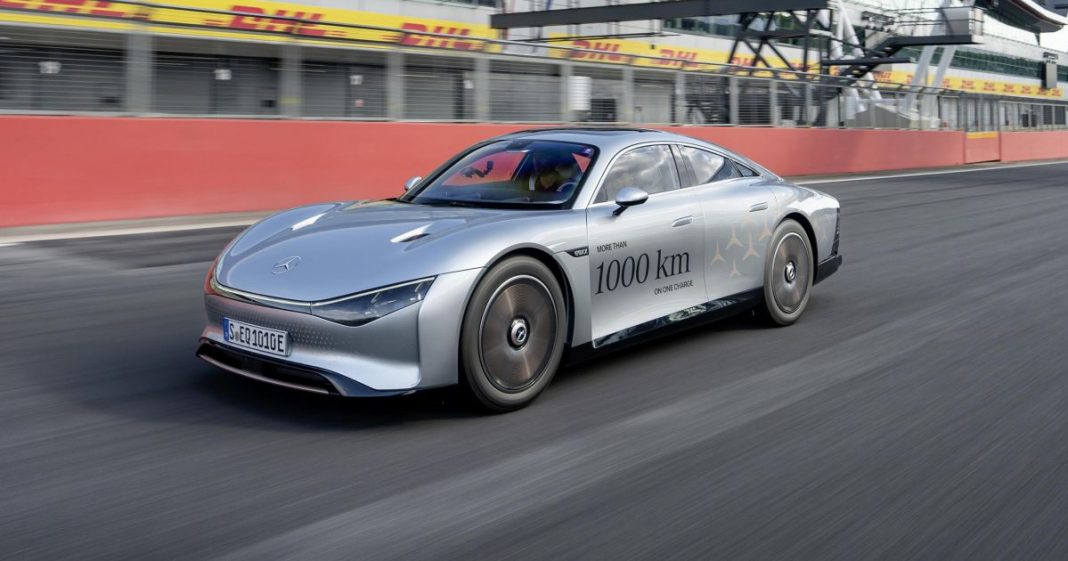 
The Mercedes-Benz Vision EQXX is already claimed to be the company’s most efficient car ever, but 1000km of range wasn’t enough for the German automaker.

After the Vision EQXX‘s first record-breaking efficiency run of 1008km from Stuttgart, Germany to Cassis, France in April 2022, the Mercedes-Benz research car has now achieved 1202km on a single battery charge from Stuttgart to Silverstone, UK.

This time the aerodynamic Mercedes-Benz Vision EQXX didn’t have to endure the cooler temperatures, nor the energy-zapping hills of the French Alps.

This latest record-breaking efficiency run was conducted over two days, with 14 hours and 30 minutes of driving time.

Mercedes-Benz indicates the air conditioning in the Vision EQXX was on for just over eight hours of this time.

The average speed throughout the entire efficiency run is claimed to be 83km/h with an average consumption of 8.3kWh/100km.

Mercedes-Benz says the Vision EQXX was able to achieve this level of efficiency due to its sleek, aerodynamic body, as well as its air-flow management keeping the electric powertrain cool under normal conditions.

There’s also a cooling plate installed in the vehicle floor, which is apparently able to use the air flowing underneath the Vision EQXX.

On the home stretch to Silverstone, the Vision EQXX was passed over to the Mercedes-AMG Petronas Formula One team who conducted the final leg.

Once it reached the Silverstone race track, the Vision EQXX was handed over to Mercedes-EQ Formula E racing driver Nyck de Vries who did 11 laps of the circuit.

While on the track the Vision EQXX was taken up to its maximum limited top speed of 140km/h a number of times.

The last of the Vision EQXX’s battery charge was used in the pit lane after its 11th lap of the Silverstone circuit.

Following this efficiency run the Mercedes-Benz Vision EQXX was fully recharged and is now on display at the 2022 Goodwood Festival of Speed where it’ll take its turn tackling the famous hill climb.

As previously reported, Mercedes-Benz claims that work to employ the technologies from the Vision EQXX in its future production vehicles is still ongoing.

For those unfamiliar with the Mercedes-Benz EQXX, it’s a sleek research vehicle that’s powered by a single electric motor producing 180kW of power and uses a battery pack with a capacity of over 100kWh.

There are also 117 solar cells on the roof that feed into a special lithium iron phosphate (LFP) battery that powers the climate control system, as well as the lights, infotainment setup and other accessories.

Unlike hyper-efficient cars of yesteryear, the Vision EQXX doesn’t skimp on luxury – as seen by the full-width dashboard screen and intricate cabin details – although it tries to do it in an environmentally-conscious manner.

The seats are clad in a leather replacement that’s largely made from cactus, while other areas employ a different leather alternative made from mycelium, the root system of mushrooms.