Few sports cars have managed to reach the near legendary status that Ferrari has achieved, and Ferrari has a reputation that makes it known across the globe among car lovers and the general public alike. Associated with extravagance and wealth the Ferrari is the first car of choice among many young professionals, and the first car that will tend to be uttered by non racing enthusiasts.

The Ferrari franchise has always been associated as something of a maverick force within the car world, somehow, someway always managing to get a vital lead over their competitors. Through innovative design, often outrageous and grandiose plans the Ferrari company has secured its place in history as a leading producer of sports cars although the Ferrari 400 has the dubious honor of being the most controversial car in a company where the norm is propelled by excess. 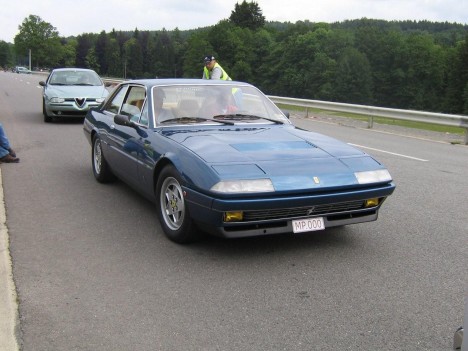 Never before has there been a sports car (or indeed any form of car) which has managed to so strongly polarize so called “fans” and devotees than the Ferrari 400.  When it was first unveiled in 1976 at the Parisian Motor show it was met with something akin to outrage from diehard Ferrari purists who were frankly appalled at the introduction of automatic transmission.  This actually become a major concern for the Ferrari Company at the infancy of the Ferrari 400, as whilst they wanted to appeal to a new market and hopefully reel in new customers they did not want to do so at the expense of alienating existing customers.

After much debate and deliberation, the executives decided that the automatic transmission would become a main feature rather than a limited edition gimmick. It was potentially a big gamble but one that paid off very well in the long run with sales of the automatic Ferrari 400s running sky high. Some manual powered Ferrari 400s were also produced (probably in an attempt to appease the hardcore loyalists!) and this has meant that today these manual Ferrari 400s are highly coveted and exceptionally rare collector’s items. Money comes, and money goes but it seems that a man’s love for his car can never die!

The controversy has also became increasingly fierce in recent years as more and more classic car collectors and nut just Ferrari afficandos) are becoming increasingly divided and opinionated as to whether or not the Ferrari 400 is a worthy investment. Given the small number of Ferrari 400s that were actually produced, and given their unique design as well as their history, they are very highly collectible items.

Sellers have had a rough time trying to actually sell them however because many people are put off by the actual physical design of the car and not everyone has been equally impressed with the Pininfarina design. Perhaps this is a blessing in disguise, ensuring that the Ferrari 400’s will remain in the safe hands of the true believers, the same men who seemed so offended when the 400 became automatic. Only time will tell.