The Lamborghini Countach was first introduced onto the public market in 1974, and was introduced chiefly with the view of besting their bitter rivals Ferrari, and whilst this rivalry helped both companies to maintain a real edge in terms of the quality of the cars they produced, the Countach was brash, ostentatious, totally impractical for a long term vehicle, and was adored by many.

Despite its expensive price tag, and high maintenance, (the Countach only managed single digits in terms of miles to the galleon) its popularity meant that the Countach enjoyed a remarkable 16 year reign. During this 16 year reign on the market, aside from its remarkable selling power, wide popularity, a grand total of 2,042 models were produced and sold, with roughly a half of this figure being made in the last 5 years of the reign of the Countach, this reflected the huge shift and increase in the production.

One of the most distinctive things of the Countach was the design of the vehicle, the Countach was entirely composed of light weight aluminium, of a grade more commonly encountered with space shuttles and aircraft. Another quirk of the Countach vehicle was its “scissors” doors, doors that swung up and down. 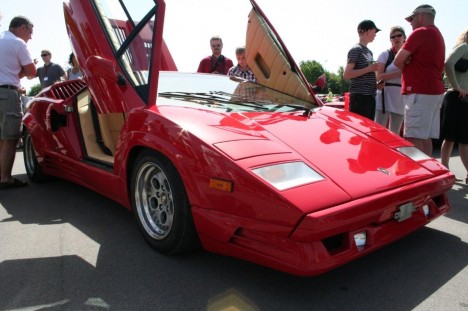 Regarded as ground-breaking when they first shown, they were to become a standard feature of all subsequent Lamborghini models. This unique design was not strictly for aesthetic reasons, the actual physical design of the car, due to the width of the car, (the car was exceptionally wide) would make the use of a conventional door in tight spaces an impossibility.

One design quirk that although easily remedied by drivers of the Countachs, was the very limited rear view visibility, making reversing, and generally being aware of traffic behind the Countach rather difficult. Subsequent changes were made purely for cosmetic enhancement, and one such modification, the locating of a sizeable engine vent at the rear of the car further severely restricted the already limited rear view visibility of the car. Such a priority over the form rather than the function of the car served to further add to the mystique and popularity of the car, sparking a great deal of discussion and debate as to what truly constituted the value of the car.

As stated earlier, the engine was located at the rear of the car, more than just an aesthetic quirk, there was a very real consideration to this: optimal weight distribution, to better achieve this, the engine itself was inverted from the usual design, meaning that the gearbox was to the front of the engine, and the output shaft to the back.

1985 saw the release of the 5000QV model, which saw the engine of the Countach increased to a remarkable 5.2 litres, the popularity of the QV model was such that the specifications were changed in the US, in order to comply with federal legislation.

In what can only be described as a true testimony to the success and popularity of the Countach model is that a working replica model of it was produced, sculpted and crafted from plaster, from which a fibreglass model was drawn. This was a trend that continued well into the mid 90s, varying degrees of success were reached, but inevitably, the process quickly died out and the companies involved in such a process very quickly died out. The trend has not resurfaced, and there does bit seen to be much chance of a revival of this fad.