The Fiat Coupé is one of the best known cars for its distinctive design.  It was released by the Italian car manufacturer, Fiat in 1993 during the Brussels Automotive Show.

During the last decade of the century, only one car was cut above the rest when it came to distinct design details for both the exterior and interior car elements.  The Fiat Coupé is one of the best cars with a distinctive design making use of unique side panels.

Although the Fiat Coupé is Italian made, the body design is actually conceptualized by an American in the person of Chris Bangle.  The Fiat Coupé’s exterior is the perfect blend of the car design which became popular in the late 90’s to the early 2000’s.  It was similar to the advanced angular exterior designs of Ford and Renault automobiles. 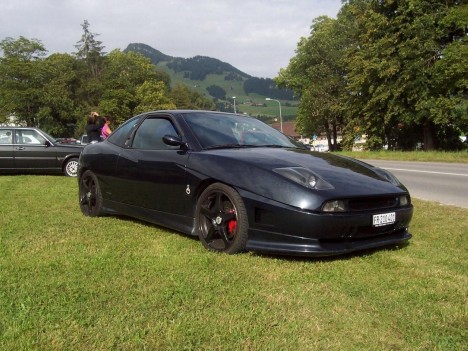 Fine Features of the Fiat Coupe

The engine, suspension and total layout of the Fiat Coupé truly meets the requirements of the distinguishing motorist.  When it was launched in the early 90’s, it was accompanied by various engine versions. The most famous being the 16V, 2.0L four cylinder engine. This engine model was available in two versions one of which was turbo charged!

The two-door, sporty and stylish exterior of the Fiat Coupé was complemented by outfitting the car with safety and stabilizing features.  Among those included were the anti-roll bar, the trailing arms and coil springs. They were used all throughout the manufacturing life span of the car giving car enthusiasts the peace of mind that they not only get speed but also safety with every Fiat Coupé. The smooth ride of the Fiat was also be attributed to the independent suspensions which were fitted on every Fiat Coupé model ever released.

The Fiat Coupé captured the imagination of the 90’s motorist.  In a seven year production span, Fiat was able to sell more than 72,000 units.  It hit its peak in 1997 when Fiat managed to sell more than 12,000 Fiat Coupé units.  This is definitely one of the highest number of units sold ever recorded for a single sports car model in a year!

The following year Fiat decided to release a limited edition model, the LE.  It even featured a neat one push start button! How cool can that get?  The exterior was modified using a complete body kit and the exterior was outfitted with Recaro seats for that racing feel. This only explains why even past the new millennium, Fiat still maintains a good following of avid car enthusiasts.