The Aston Martin Lagonda was first introduced and made available for sale on the general market in 1976 and sold with an average price tag of £150,000 and was a luxury saloon car, and was not well received. It was condemned and slated for both its unappealing aesthetic value, as well as a weak and inefficient mechanical system as well as an appalling safety record.

The Aston Martin Lagonda was a car that was plagued with flaws and faults, both petty and significant and many felt that it was the worst possible offering ever made by the Aston Martin company. It polarised the car market, buyers either loved it or hated it, but the few fans that it garnered were quickly alienated by the poor reliability of the vehicle. All of this is surprising given that each individual Lagonda was pain-stakingly hand crafted, which accounted for its exceptionally high price tag and the design of the Lagonda whilst not well received back in the 70s. The actual physical design of the car was called the “folded paper” design and has not became any more popular some 30 years later. 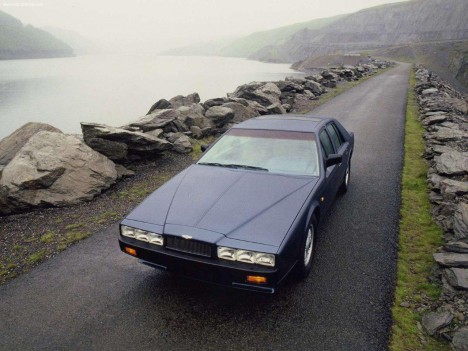 In total, it took an average of 2,200 hours in order to create each Lagonda from scratch, and due to such labour intensive and time consuming production, only 25 of the models were produced for sale in the US per year.

One of the major problems of the Lagonda was that it tried to be cutting edge and innovative, making use of modern technology and thereby impressing the driver with such an advanced and sophisticated driving experience. However, the Lagonda model was too ambitious, and many of the electronic gadgets and components of the car refused to work and were highly temperamental. The Lagonda wanted to be a leading force in the market, and to that effect, Aston Martin specified that all Lagonda models were to be fitted with digital instrument panels and controlled by computers, this was despite a huge failure rate within both the resting stage and the original prototypes.

The computer management systems and all the other electronic gadgets of the Lagonda (somewhat unsurprisingly) were the most saturated area of research focused on by Aston Martin, the company committed 4 times their budget on the electronics as they did on the other, more essential elements of the car.

The reputation of the Lagonda of being a grandiose monstrosity concerned with image and style than actual substance was further compounded by the rather meagre, indeed primitive engine and mechanical specifications of the car. The Lagonda made use of a 8 cylinder engine and a Chrysler 3-speed automatic transmission, meaning a very poor performance in terms of fuel consumption, meaning that the vehicle was not a financially viable option.

In 1987, minor alterations were made to the Lagonda, these alterations were again somewhat unsurprisingly, purely cosmetic, and simply refused to deal with or acknowledge the criticisms that consumers had levied in regards to the car since its conception. The modifications were little more than a change of the metal used for the wheels and smaller lights used in place of the previously larger head lights. The pop up headlights had proven highly unpopular due to their unreliability and lack of safety, the modification of the car headlights however were most likely as a ploy to alter the appearance rather than the actual engineering qualities of the car.

The Lagonda continued in production until 1990, by which time some 645 models have been manufactured, and to this day, it enjoys a cult following among its fans.