The Mazda RX-7 is a Japanese born sports car that has enjoyed a long stay in the market, spanning over two decades and to this day, over 800,000 units of the Mazda RX-7 have been produced worldwide. Whereas many models of cars tend to go “stale” after several years quickly losing the impact they once had on the general public, the Mazda RX-7 was a creative and unique car when it was first released and remained so throughout its lifetime.

The 1970s was something of a dark era for automobiles, with a greater degree of seemingly arbitrary interference by governments worldwide; automobiles were designed with functionality rather than aesthetic value in mind. With high bumpers, strong regulation of the shape and size of the wheels and the like, many cars produced during the 70’s  were nothing short of ugly, tin cans with wheels with very little elegance or creative flair. The Mazda RX-7 when it was first released for sale quickly garnered a great deal of positive attention as it was sports coupe, a type of car which was fast becoming a dying breed in the 70s. With strong government interference severely hindering and restricting the design of new automobiles, and with many of the worlds leading automobile producers finding that their existing models were beginning to alienate the consumer, the market was crying out for a new, sexy sports car which was affordable. The Mazda RX-7, affordable, stylish and elegant, proved to be the pinnacle of engineering (and marketing success) which seemed to be so sorely lacking in the 70s, although it is both unfair and untrue to say that the Mazda RX-7 owed its success solely to the lack of strong competition. 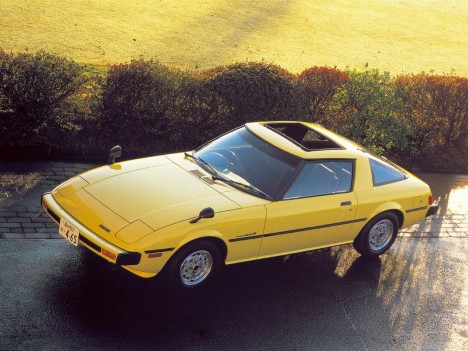 One of the major selling points of the Mazda RX-7 was that for those who underestimated its power, were in for a big surprise. Sports car fans had so far had to put up with flashy gimmicks such as suspension system that was present in the Porsche 928 model, where the gimmicks were pretty much the only real selling point for the car in question.

The Mazda RX-7 on the otherhand chose not to focus on one or two specific areas and improve them, but rather, sought to enhance them all so as to ensure that the sum total would be far greater than each of the individual parts.

Painstaking efforts were taken to distribute the weight as effectively and efficiently as possible to help improve steering and handling of the vehicle, again setting the Mazda RX-7 worlds apart from its rivals. Introduced in 1978, the Mazda RX-7 underwent little more than a few minor cosmetic changes and was not given any sort of meaningful rehaul until the 2nd generation of Mazda RX-7 which was devised in 1986. At this time, the producers of the Maxda wanted to update the rather antiquated bodywork, and so reduced the overall length by just over an inch. An innovative new rear suspension system was introduced as well.