The XK 120 was a sports car introduced for sale on the public market in 1948 by the automobile company jaguar in a bid to provide a financially viable, and quality product to capitalise on the success of the predeceasing SS 100 model. The original models that were introduced in 1948 were manufactured using aluminium to create the bodies although this was later subsequently replaced by steel 2 years later as the production process involved for using aluminium was thought to be time consuming and labour-intensive. Production of the XK 120 ended in 1954, and whilst this 6 year reign is rather short, the XK 120, the deep impact it had on the future of all subsequent Jaguar models cannot be underestimated.

However, the XK 120 placed Jaguar in a somewhat (almost amusing) predicament, whilst they had unveiled their new intended model they had not actually made any long terms as to the continued production of the XK 120. Jaguar for whatever reason  had not intended for the XK 120 to be a volume production car, hence why the XK 120 originally began its life produced with aluminium and by hand and it was both a blessing and a burden that production had to altered to keep in line with the ever increasing market demand. It was not until 1950 that consumer demand and sufficient funds had been accumulated to finally engage in an absolute steel production process. 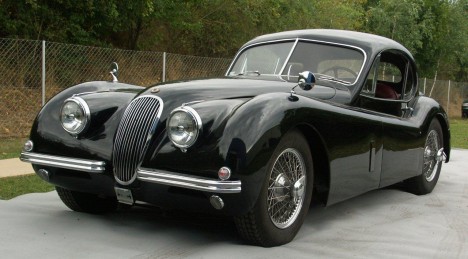 When the Jaguar XK 120 was first released in 1948 and displayed for viewing by the general public at the London Motor show it was hailed as the fastest car on the market, the XK 120 in the name was no random occurrence, it was a reference to the alleged top speed of the model, please note this 120 mph was a base rate, even higher speeds could be reached with the removal of the windshield.

These feats of engineering prowess, coupled with the outright sleek and sexy aesthetic appeal of the car meant that it won the hearts of the general public almost instantly.  Apart from the remarkable top speeds the XK 120 could reach, the XK 120 was also the worlds very first mass produced engine that made use of win overhead camshafts and hemispherical combustion chamber.

These forms of engines were notoriously costly, and best suited in the realms of professional racing cars, Jaguar managed to competently bridge the gap between such high-performing but also costly engines making them accessible to the average consumer. This was a huge gamble on Jaguars part, there was the very real possibility, indeed danger, of the average consumer unwilling to buy such vehicles.

Jaguars strategy was that the cars featuring such an engine would prove to be popular not just as a gimmick, but in the long term, with such continued and prolonged market power, this would mean that the overall costs of the engines could be reduced allowing for a reduction in the sales price. This in turn Jaguar hoped, would lead to an infinite circle of supply and demand, all the while banking on the market position of the Jaguar brand reaching new customers and new markets.

In 1950 there was the release of the Mark VII saloon, and wanting to capitalise on the strong market dominance of the XK 120 and the VII saloon, jaguar offered customers to customize and modify their cars to their own tastes, this feature proved to popular among customers seeking to use their cars in racing.

It should also be noted that with the introduction of the Mark VII, Jaguar encountered an all too familiar problem: the factory was not large enough to keep up with demands.