You may have seen that wedge shaped car parked in the country club beside the Mercedes Benz convertible.  No it is not an American sports car; it’s the Italian Fiat X1/9.

The prominent appearance of the Fiat X1/9 is not just attributed to the wedge-shaped car exterior design, it also features mounted headlights – now you see them, now you don’t.  Some would compare the Fiat X1/9’s design to that of a contemporary powerboat design.  This is attributed to the small wind deflectors featured on the Fiat coupled with the shape and the hidden headlights.

The Wonder Years
The Fiat X1/9 was released in the early 70’s where Bertone, an Italian design team hatched the magnificent two-seater classic design that would capture the imagination of international car enthusiasts. Needless to say, the Fiat X1/9 was well-known for its arresting looks.  It also handled superbly for a sports car in that era and most of all, it managed to sell a lot of units from the onset of its production due to its relatively affordable price tag.  Mass production could never have been timelier for a particular car model. 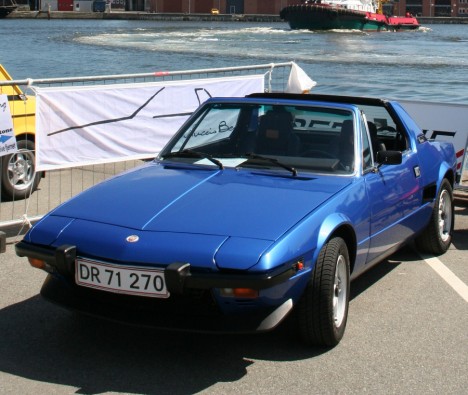 The Fiat X1/9’s model name used a contrasting naming convention compared to the other Fiat models.  Usually Fiats were named using numbers like the Fiat 127 and 128.  This would denote the order of the car model’s release or even the position it held in relation to the currently released models giving you an idea of the existing car model hierarchy of sorts.

During the late 60’s to the early 70’s codenames were used by Fiat for all their product development projects.  Talk about undercover secret agent spy stuff!  These development projects tagged the “X” projects had subcategories which represented the various engine designs that were being tested. Examples of which included the X1 for passenger vehicles and the X3, used as the tag for commercial vehicles.

The earliest Fiat passenger vehicle got the tag X1/1 and during its commercial release in 1969 it was then called the Fiat 128.  The X1/9 on the other hand, also had a commercial release name, the 128 Spider.  But for some reason, it somehow managed to retain its production code even throughout the commercial launch and mass production, amazing!

The production scale of the Fiat X1/9 escalated rapidly at the time where it reached a total of more than 170,000 units which were sold for nearly two decades.  The particular Fiat model soon replaced one of its predecessor roadsters, the Fiat 850 Spider in 1972.

In 1982, all the X1/9 cars produced at that point were given a new name, the Bertone X1/9, named after the car designer.  The line featured enhanced leg space which catered to relatively taller motorists.  The last known model of the Fiat X1/9 was the Gran Finale. The said model featured some modifications and was even tagged as Special Edition during its last production years of 1988-89. The X1/9 represented the classy sports car of the 80’s and it will be remembered by avid car enthusiasts across the globe.